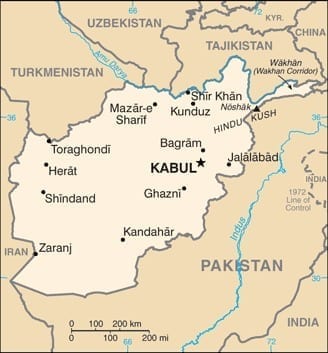 Afghanistan is located in Southern Asia. The country is landlocked and bordered by Pakistan, Iran, Turkmenistan, Uzbekistan, Tajikistan and a small bit of China. The country’s land area is 652,230 sq. km., slightly smaller than Texas.

Afghanistan’s current government is an Islamic republic with 34 provinces. The branches are as follows:

Afghanistan has a mixed legal system of civil, customary, and Islamic law.

Afghanistan’s economy, which is recovering from decades of conflict, has improved significantly since the fall of the Taliban in 2001. This is largely due to the infusion of international assistance, the ongoing recovery of the agricultural sector and growth of the service sector. Despite the progress, Afghanistan is extremely poor. Its standard of living is among the lowest in the world.

¹Afghanistan’s economic freedom cannot be graded because of a lack of reliable, comparable data.

While a commercial court system exists in Afghanistan, the lack of commercial contract laws, a shortage of qualified legal practitioners and corruption in the judicial system are significant impediments to the arbitration of commercial matters.

The enactment in January 2007 of Arbitration and Mediation laws established the foundation for an alternative dispute settlement system. Afghanistan is a party to the Convention on the Settlement of Investment Disputes Between States and Nationals of Other States and the New York Convention of 1958 on the Recognition and Enforcement of Foreign Arbitral Awards.

Criminality, insecurity, weak governance, and the Afghan government’s difficulty in extending rule of law to all parts of the country pose challenges to future economic growth. However, according to the Department of States’ 2011 Investment Climate Statement:

“The Afghan government recognizes that the development of a vibrant private sector is crucial to the reconstruction of their economy, which has been ravaged by decades of conflict and mismanagement.”

The Afghan market presents opportunities for exporters with the right products, services, and commitment. Agriculture remains a strong market driver with significant opportunities in agri-business and agriculture distribution and infrastructure.

In the past 5 years, services have contributed about half of GDP output. The most dynamic services subsectors include: information & communications, technology, finance & insurance, transport and construction. In addition, Afghanistan’s natural resources including gold, silver, copper, zinc, iron ore, precious and semi-precious stones, as well as potentially significant petroleum and natural gas reserves make these sectors ripe for future growth.

Economic Freedom: According to the 2018 Index of Economic Freedom, Afghanistan’s economic freedom cannot be graded because of a lack of reliable comparable data.

Market Access: Official support for open markets and private sector participation is formally stated in the Afghanistan National Development Strategy (ANDS), which was endorsed in June 2008 by President Karzai and the international donor community. However, many challenges exist which make it difficult to do business in Afghanistan, including those listed in this section along with poor infrastructure and a shortage of skilled and trained labor.

Regulatory System: The Afghan economy’s private sector is hampered by regulatory ineffectiveness that contradicts official policies. Customs regulations and procedures are neither transparent nor consistent despite the fact that the Afghan government’s policy is to promote transparent policies and effective laws.

Exchange Control: There are no restrictions on converting, remitting, or transferring funds associated with investment, such as dividends, return on capital, interest and principal on private foreign debt, lease payments, and royalties and management fees, into a freely usable currency and at a legal market clearing rate. Foreign investors should use only licensed hawaladar (money service providers), who are listed on the website of the Da Afghanistan Bank.

Corruption: Corruption is pervasive in Afghanistan. The country ranked 172nd out of 180 countries in Transparency International’s 2018 Corruption Perception Index. Corruption among the working-level officials who administer the regulatory system is one of the largest obstacles to investment in Afghanistan.

Political Violence: Political uncertainty and security challenges remain formidable. The rule of law continues to be fragile and uneven across the country. Security threats limit investor opportunities in some regions.

Sources for further information on doing business in Afghanistan

American Chamber of Commerce in Afghanistan

Doing Business in Afghanistan, Embassy of the United States in Kabul

The Embassy of Afghanistan, Washington, DC

This information is provided by ABC-Amega Inc. Providing international receivable management and debt collection services for exporters to more than 200 countries including Afghanistan. For further information, contact [email protected].