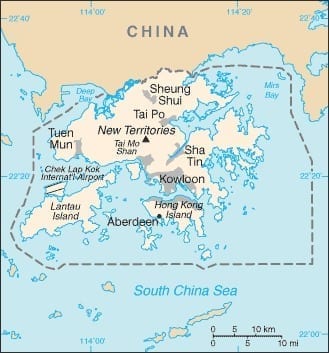 Hong Kong’s legal system is based on English common law. Its constitution strongly supports private property and freedom of exchange.

Hong Kong has a free market economy, highly dependent on international trade and finance – the value of goods and services trade, including the sizable share of reexports, is about four times GDP. Hong Kong has no tariffs on imported goods, and it levies excise duties on only four commodities, whether imported or produced locally: hard alcohol, tobacco, oil, and methyl alcohol. There are no quotas or dumping laws. Hong Kong continues to link its currency closely to the US dollar, maintaining an arrangement established in 1983.

Hong Kong’s open economy has left it exposed to the global economic situation. Its continued reliance on foreign trade and investment makes it vulnerable to renewed global financial market volatility or a slowdown in the global economy.

Coface Country Rating: A3 — The political and economic situation is good. A quality business environment has a positive influence on corporate payment behavior. Corporate default probability is very low on average.

Hong Kong is a free port with virtually no duties or tariffs. Its strong rule of law and respect for property rights make it a strategic platform for companies, especially small- and medium-sized firms, seeking to do business in Asia and particularly in mainland China.

Hong Kong enjoys a high degree of autonomy as a separate customs territory, with no changes to borders, staffing, or technology export controls since the 1997 handover by the United Kingdom to China.

Economic Freedom: Hong Kong’s economic freedom score is 90.2, making it #1 among all the 179 countries ranked in the 2019 Index of Economic Freedom. (The United States is ranked 9th. China is ranked 135th.) Business freedom in Hong Kong is well protected.

Market Access: Hong Kong’s weighted average tariff rate was 0 percent as of 2019. However, restrictive pharmaceuticals regulation, market access restrictions for some services, and food and energy labeling regulations do add to the cost of trade.

There are no limits on foreign ownership and no screening or special approval procedures to set up a foreign firm except for certain legal services and in broadcasting.

Regulatory System: Business freedom in Hong Kong is well protected within an efficient regulatory framework. The bureaucracy is efficient. Bureaucratic and regulatory transparency, along with the overall environment, is conducive to doing business.

Intellectual Property Rights: Despite government public awareness campaigns, pirated and counterfeit products such as CDs, DVDs, software, and designer apparel are sold openly. Pressure has been building for changes in the Copyright Ordinance.

Exchange Control: Since the Hong Kong dollar maintains a fixed exchange rate with the U.S. dollar, interest rates and currency movements follow trends in the United States. Foreign capital receives domestic treatment, and foreign investment is strongly encouraged. There are no controls or requirements on current transfers, access to foreign exchange, or repatriation of profits.

Corruption: Corruption is perceived as minimal. Giving or accepting a bribe is a criminal act. Business malpractice and corruption are serious crimes. Hong Kong scored 7.6 in Transparency International’s Corruption Perceptions Index for 2019 (1 is completely corrupt; 10 is very clean). This makes them the 16th “cleanest” country out of the 180 countries rated. (China was rated 4.1 ” 80th ranking. The U.S. rated 6.9 ” 23rd ranking).

Hong Kong City is a highly developed business city with a well-established code of business conduct.

Hong Kong business people prefer a no-nonsense approach in business negotiations. It is therefore not necessary to “beat around the bush.” People will come to you when they have a real business need. Business discussions should therefore be straightforward, clear and to-the-point. While relationships (guanxi) can play a role in some situations, it is increasingly the company that offers a better deal (in terms of price, quality, time-to-market, etc.) that is able to win the deal.

Sources for further information on doing business in Hong Kong

This information is provided by ABC-Amega Inc. Providing international receivable management and debt collection services for exporters to more than 200 countries including Hong Kong. For further information, contact [email protected].